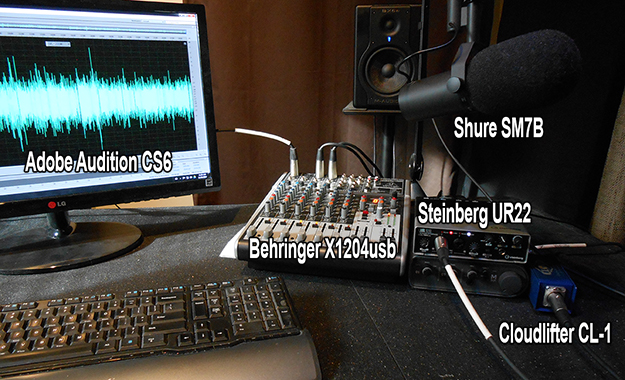 Once a month we record Makeshift Stories in our basement.

We have converted a bedroom into a studio. Over the last year we have been adding DIY sound treatment, in the form of curtains and baffles on the ceiling. It is far from perfect; there’s still some low frequency resonance that needs base traps to absorb it. As well external sounds from other parts of the house, walking, washing machines, and outside noises such as lawnmowers etcetera, which means that there are frequent breaks and retakes during recording.

The gear has evolved considerably since we’ve started. Initially, we used a mac mini running Garage Band paired with an M-Audio Fast Track Pro and two Apex 435 Wide Diaphragm Condenser microphones. When we started doing audio book style stories, this combination did not deliver clean enough audio. I tried to use a dynamic mic, a Shure SM7B, in combination with the Fast Track, but the output from the SM7B was too low for the Fast Track to handle. Since then we have tried a Heil PR40 in combination with an Avid M box. Again the preamps on the M Box had to be maxed out to get a reasonable signal which introduced noise. We used this combination, filtering out the noise in Adobe Audition, until recently when the PR40 developed a hum. It is a still favourite mic, but I switched back to the SM7B and changed audio interfaces again this time to a Steinberg UR22, with Yamaha’s D-PRE preamps. The Steinberg gave reasonable results but even with the D-PRE preamps the SM7B required maximum gain. The challenge has always been to get the best recording we can with a modest budget, so the final piece only recently fell into place. After some research, I, found out about a box called a “Cloud Lifter” that is designed to give a 25+dB transparent boost to signals from low output ribbon and dynamic mics. The box is roughly $170, and I wish I had discovered it years ago. I would highly recommend it.