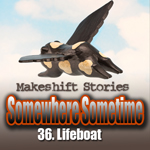 With the first Moon landings in the late 1960’s many may have felt that a Mars mission was no too far off, but since that time no human has left near Earth orbit.

On the 200th anniversary of the first moon landing an international mission is poised to be the first human presence on Mars, but events are more complex than they seem.

END_OF_DOCUMENT_TOKEN_TO_BE_REPLACED 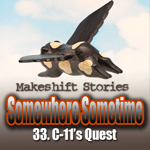 An automated planetary mission goes awry when it is hit by solar flares. Unit C-11 one of the landing group’s communication nodes attempts to repair its damaged memory with information erroneously downloaded from the mission’s orbiter. Once assimilated, the information along with a comment from one of the mission control hubs, convinces the tiny robot that it is a knight-errant on an important quest.

END_OF_DOCUMENT_TOKEN_TO_BE_REPLACED 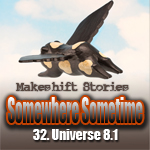 Lambent Nape Nor works at the Infinite Macro Cosmic Reality Corporation as the assistant head of product design and customer services for Universe 8. Despite Lambent’s concerns management insists on a last minute change to an already rushed update. It quickly becomes evident that change does more than they had intended.

The week’s story is based on the idea proposed by physicist David Bohm that the Universe is might be similar to a holographic projection and discussion around our house on recent news headlines that graphically point out how things don’t always go as planned.

END_OF_DOCUMENT_TOKEN_TO_BE_REPLACED 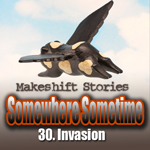 A 500 hundred year old terraforming project is derailed by an imminent invasion. No one, except a small group of scientists, understands the true nature of the threat and its real implications for the future of their civilization.

This story evolved out of a discussion on James Lovelock‘s Gaia hypothesis that the earth is an single complex organism, the recent announcement of the creation of a synthetic genome, and a story that appeared about the possibility of life on Titan, based on an entirely different chemistry then our own.

END_OF_DOCUMENT_TOKEN_TO_BE_REPLACED 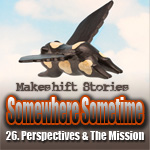 This month we present to two short stories. In first one called, Perspectives, a routine mission is suddenly changed by a chance encounter in depth space. This story evolved out of a one of David’s writing assignments at school.

In our second story, entitled, The Mission, the leader of a multi-generally space craft reports their research findings after nearly 50 years of silence. This story grew out a conversion around Steven Hawking’s comments on the possibility of Alien Life, made at NASA’s the 50th anniversary.