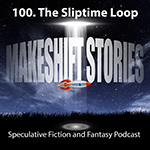 Authorities in the minor galactic spur of Orion contract the Hyper Nova to clean up an illegal dump hidden in the orbital trash of a backwater planet. Something in the debris has been leaking tachyons and tau neutrinos which are interfering with navigation in a nearby space lane. After locating the offending device, the crew is confronted by an angry alien who claims to own it. And they are forced into a dangerous situation in which a cup of coffee plays a pivotal role.

All the characters were preformed by Mitchell Tew.

All royalty free Sound FXs are licensed from Sound Snap at soundsnap.com

Royalty free organ and period music are licensed from Stockmusic.com

Makeshift Stories is released under a creative commons non-commercial attribution no derivative license. Which means that you are free share our stories just remember to credit us and don’t alter anything.