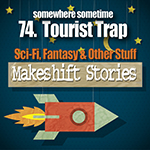 There are many legends associated with certain famous objects and sites around the world. Loch Ness, the Pyramids, the Nazca Lines, the plain of Jars or Stonehenge, which various groups have thought to be everything from a pagan solstice monument to a UFO landing site, all have mysteries to be revealed and believers who are convinced that their particular theory is the correct one.

In this month’s story a boy befriends an aging street person who is the self-appointed guardian an odd public sculpture. No one believes the old woman’s claims about the true origin of the monument, and she is eventually forced to ignore her own warnings to protect her new young friend.