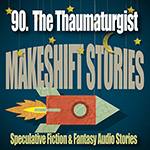 In this month’s story Illusio, a veteran TV illusionist who is struggling to keep himself interested in his profession is confronted by an eager amateur magician named Dai. When Dai tries to unravel the mystery behind Ilusio’s unusual act, the older magician brushes the annoying upstart off, but inadvertently finds himself becoming fascinated by the simple tricks the youth performs. Envious of the younger magician’s enthusiasm and sense of wonder, Illusio makes the young illusionist an offer that he cannot refuse.