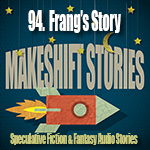 In this month’s story the third generation leader of a divided colony ship, drifting between the stars, tries to escape his duties by submerging himself in fictional stories. But at a critical moment the line between fiction and reality blur, when one of the characters from a book escapes fictional space to oppose him.