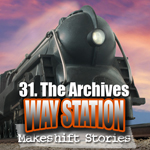 Maya and Tim live in a future that is powered by coal, kids over 8 must work for a living, and reality is not what it seems.
Tim’s parents died after an apparently random traffic accident, leaving him alone, and in debt for the medical expenses. Unable to pay, his liabilities were auctioned off to a family who owns a café, where he now has to work until their daughter, Maya, finishes college.

After receiving an unexpected message warning him to check the server logs at the café, Tim and Maya go to meet the mysterious sender, who initially appears to be a bag lady, but is in fact from an old eccentric wealthy Way Station family. She takes Tim and Maya to the disused top floor of the Ashton Towers, where she reveals her involvement in a hundred year old society that is trying to understand the actions of an elusive and dangerous group which has been apparently changing history.

Tim’s gopher server project has inadvertently brought him, Maya and the café under the scrutiny of this organization and the Europa café’s future may be threatened as a result.
END_OF_DOCUMENT_TOKEN_TO_BE_REPLACED 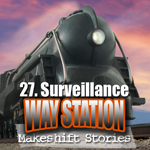 A heavy rain storm breaks Way Station’s heat wave, but along with the storm two strange customers appear at the Europa Café. They appear to know more than they should and this spooks Maya. After hearing about them Tim tells Maya about some other odd happenings then is spooked himself by an unexpected message.
END_OF_DOCUMENT_TOKEN_TO_BE_REPLACED 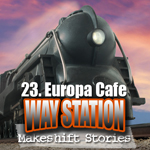 Maya and Tim work at the Europa Cafe in Way Station – a place out of time where things are run by steam, trains are the main means of transportation and adults don’t seem to remember what really happened in the past.

One night Tim discovers someone has been breaking into one of his personal online projects and so begins an adventure that takes them both into a hidden world of intrigue.
END_OF_DOCUMENT_TOKEN_TO_BE_REPLACED